Social Science
Anthropology
Psychology
Sociology
Science
ChemistryQ&A LibraryAssign boiling points to the given substances based on intermolecular forces.A100B20C-33B: HFA: H2OC: NH3Why does  NH3  have a lower boiling point than HF?

Assign boiling points to the given substances based on intermolecular forces.A100B20C-33B: HFA: H2OC: NH3Why does  NH3  have a lower boiling point than HF?

Assign boiling points to the given substances based on intermolecular forces.

Why does  NH3  have a lower boiling point than HF?

Why NH3 have a lower boiling point than HF is to be explained.

The boiling point determines the strength of intermolecular forces between their molecules.

Thus, the stronger the intermolecular force, higher is the boiling point.

Intermolecular interactions are the forces that act between the neighbouring molecules.

In general, there are four types of intermolecular forces-

London-dispersion forces: It is the weakest force that exists between all the molecules. It is temporary attractive force that results due to movement of electrons.

Ionic-forces: This type of interaction occurs between two ions or ionic compounds.

Now, all HF, H2O and NH3 are capable of forming hydrogen bonds. 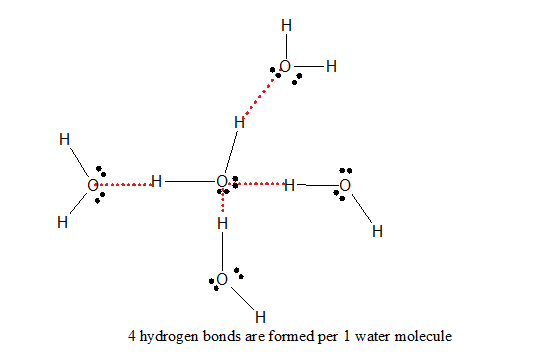 Q: Hydrogen peroxide may decompose to form water and oxygen gas according to the following reaction. ...

A: The equilibrium constant of decomposition of hydrogen peroxide is calculated as,

Q: Balance the following equations. (Use the lowest possible coefficients. Omit states-of-matter in you...

A: (a) The balanced equation of the given reaction is as follows:

A: Since you have posted multiple questions, we will solve first one for you. To get remaining question...

A: (a)First, the enthalpy change value has to be calculated.

A: Given that atom X in a molecule has tetrahedral electron geometry but a bent molecular shape.   Tetr...

Q: You calibrated a different pipet and determined its volume to be 25.20 mL. You then use it to determ...

Q: How many moles of NaCl are prepared in the following solution? .1 Liter of .2 M NaCl are combined wi...

A: The number of moles can be calculated by taking the product of molarity of a solution and the volume...

A: a)One day has 24 hours with it. The number of tablets needed for one day’s treatment is shown as bel...