Draw a stepwise mechanism for the following reaction.

To form the target molecule, the conversion of pyranose into furanose takes place. The mechanism of the reaction is preceded by the protonation of the starting material, followed by shifting of electrons present on hydroxyl group to stabilize oxonium ion. In the next step, a hydroxyl group attached to fourth carbon attacks on the first carbon atom to generate furanose ring with a positive charge on -O atom followed by reaction with A- base to form furanose ring. The stepwise mechanism for the conversion of pyranose into furanose is shown below: 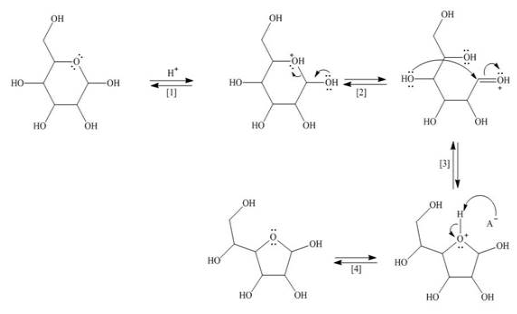 The [1] step of the reaction comprises the protonation of the carbonyl compound to produce alcohol. The hydroxyl group is attached to the electron deficient carbon atom. The corresponding reaction is shown below:

In [2] step, the electrons present on -OH group of furanose attacks on electron-deficient carbon atom of an alcohol, followed by [3] step in which abstraction of H+ ion by water takes place to form a hemiacetal. The corresponding reactions are shown b...

Q: What is the order with respect to A for this reaction givven the experimental data below? Concentrat...

Q: Compare the following ionic compounds and determine which bond is stronger and why? A. LiCl or NaCl ...

A: As per guidelines, we only answer up to 3 sub-parts, we’ll answer the first 3. Please resubmit the q...

Q: What products are formed when each compound is subjected to a Kiliani–Fischer synthesis?

Q: What alkene is needed to synthesize each amino acid by an enantioselective hydrogenation reaction us...

A: The amino acid, alanine is formed by enantioselective hydrogenation of achiral alkene with hydrogen ...

Q: (a) Draw the more stable chair form of fucose, an essential monosaccharide needed in the diet and a ...

A: The Fisher projection is drawn by converting the stable staggered conformation into less stable ecli...

Q: Sulfuric acid reacts with ammonium hydroxide.  What is the sum of the coefficients for the reactants...

Q: compo 2. Which will react the fastest in the electrophilic addition reaction? hree or feyver car (c)...

A: In electrophilic addition of a Bronsted acid (hydrogen halide) to an alkene, the reaction takes plac...

Q: What α-halo carbonyl compound is needed to synthesize each amino acid: (a) glycine; (b) isoleucine; ...

A: (a)The alpha-halo carbonyl compound needed to synthesize glycine must have same number of carbon ato...