The financial results in the first couple of years were mixed. Earnings increased slightly and then dropped each year even though sales volume was relatively flat. In total, merchandising costs dropped, while pricing promotion rates escalated. The GMI sales force focused on the impulse segments and pricing promotions were believed to be driving volume increases. However, volume in the shop segment declined at alarming rates and there was widespread dissatisfaction in the sales organization. While GMI knew sales by segment, they didn’t track costs by segment.

Instead costs were allocated based on sales dollars. The situation was ripe for a clearer look using ABC methods.

When Colombo Yogurt Company began marketing soft-serve frozen yogurt in the early 1980’s, their main distribution was through independent yogurt shops. In the early 90’s, they faced competition from franchise operations such as TCBY and Freshens that replaced many of the independent yogurt shops. And the market changed as Foodservice operators such as cafeterias, colleges, and buffets started to add soft-serve yogurt to their business. By the late 90’s, these Impulse locations accounted for 2/3 of the soft-serve market.

In the late 90’s, Shop sales began to increase with the addition of distinctive new products such as smoothies, boosters, and granitas. The Shops make their living from the soft-serve business and must innovate or go out of business (as thousands have done in the last decade). On the other hand, the Impulse locations make their living from other items and the soft-serve trade is only performance topspin. These firms are unwilling to take any risk (new equipment or extra labor) to serve highly differentiated products like smoothies or granitas.

Salesforce: Colombo’s salesforce was merged into the Foodservice salesforce. Customers were reassigned to salespeople who already serviced that geographical area. The salespeople varied in their reaction to the product. Some found shops easy to sell to while others avoided the shops despite the possible lost commission. Many spent a lot of time helping their impulse customers understand how to use the machinery.

Pricing Promotions: Pricing promotions are a mainstay of GMI’s impulse location approach. GMI’s salesforce generally used these promotion events as an opportunity to visit their accounts and take advantage of the occasion to meet service needs and sell other products that may not be featured.

GMI made price promotions available to both segments of the market. While the deals were typically around $5 per case, they averaged $3 per case against all the volume shipped during the year. GMI marketing knew price was not a major decision factor for Shops and they did not target pricing promotions to them. However, Shops were aware of the promotions and took advantage of them.

1. Colombo  Frozen Yogurt business was mainly sale of soft-serve frozen yogurt and initially they used to sell to independent yogurt shops. But when other franchisee business cropped up, they were facing tough competition. 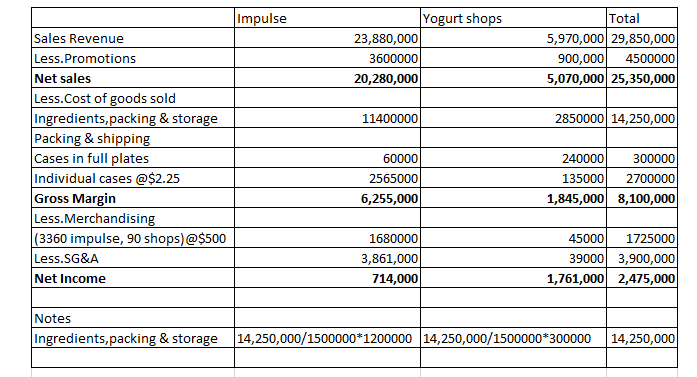 A: We can anser this question by creating the following schedule of expected payments :

Q: Effects of stock split and stock dividend on EPSRequired:a. For the year ended December 31, 2015, Fi...

A: Stock split means new shares are issued to the current shareholder’s in proportion of their existing...

Q: What are some examples of such exclusions in gross income?

A: Gross Income: For individual: Gross income includes the income of an individual in the form of wages...

Q: Hi, I'm not understanding this problem or where I went wrong with my calculations? Can you help me s...

A: Calculate the Gain on redemption of bonds:

Q: I'm having trouble solving this problem. I don't understand it at all and even tried viewing the 'sh...

A: Cash flow from operating activities relate to the cash generated from operations i.e. normal day to ...

A: Annual Deposit: Annual deposit refers to the amount deposited annually in a fund or for a specific p...

Q: What is the correct answer for this question?

A: The variances are differences between the budgeted and actual expenses. Spending variances= Actual c...