Social Science
Anthropology
Psychology
Sociology
Science
ChemistryQ&A LibraryWhen 15.0 mL of a 8.40×10-4 M ammonium fluoride solution is combined with 25.0 mL of a4.22x10-4 M magnesium bromide solution does a precipitate form?(yes or no)For these conditions the Reaction Quotient, Q, is equal to

When 15.0 mL of a 8.40×10-4 M ammonium fluoride solution is combined with 25.0 mL of a4.22x10-4 M magnesium bromide solution does a precipitate form?(yes or no)For these conditions the Reaction Quotient, Q, is equal to

For these conditions the Reaction Quotient, Q, is equal to

Precipitate formation during reactions can be governed by the solubility product (Ksp) value of that precipitate. When the product of ions concentration of that compound which is called reaction quotient exceeds value of Ksp , compound starts precipitating out as solid insoluble salt.

The volume of ammonium fluoride is 15 mL.

The volume of magnesium bromide is 25 mL.

The reaction between ammonium fluoride and magnesium bromide is shown below.

Thus, the concentration of reactants after mixing is calculated as follows,

The volume of reactant before mixing is “V1”.

The volume of solution after mixing is “V2”.

The concentration of reactant before mixing is “M1”.

The concentration of reactant after mixing is “M2”.

Substitute the known values for NH4F in equation (I). 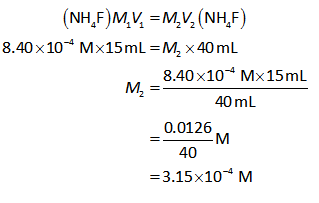 Similarly, substitute the known values for MgBr2 in equation (I). 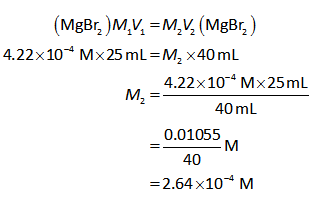 Dissociation of magnesium fluoride is shown below.

Substitute the values in the formula.

As, value of Q less than that of Ksp, precipitation will not occur in the reaction.

Q: Can you write the mechanism

A: In the given reaction, secondary amine (piperidine) reacts with a ketone (acetone) to form enamine a...

A: The heat of a substance is given as :

Q: To find the density on a graph you normally plot volume on the x axis and mass on the y axis. If you...

A: Density can be calculated using the following formula, Density = mass / volume

Q: Toradol is used in dentistry to relieve pain. Name the functional groups in this molecule. (Select a...

Q: Draw the organic product of the following equation. Include all hydrogen atoms.

A: An alkyne is an organic compound that contains a carbon-carbon triple bond. When an alkyne is hydrog...

Q: The pH of a saturated solution of cerium(III) hydroxide in water is 9.20. Calculate a value for the ...