Question
Asked Mar 8, 2020
56 views
Which of the following will have a Lewis structure most like that of carbon disulfide?
Group of answer choices
a. NO2-
b. SO2
c. water
d. NO2+
e. CH4
check_circle

Lewis structure can be drawn by the following steps,

Lewis structure of carbon disulfide is shown below,

Outer valence electrons of Carbon and sulfur are 4 and 6 respectively. 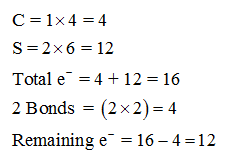 Since octet rule does not obey for all the atoms, a double bond is made between carbon and sulfur atoms. Therefore, Lewis structure of carbon disulfide follows as,

A: Formal charge on an atom is given by,

Q: Which D-aldopentose is oxidized to an optically active aldaric acid and undergoes the Wohl degradati...

A: The structure of possible optically active aldaric acid from D-aldopentose are,

A: The volume of the metal cylinder can be calculated by using its density and mass as given below.

A: Calculation of No. of moles :

A: There are five carbon atoms present in the D- xylose. That means it is formed by an aldose which con...

Q: The average daily mass of O2 taken up by sewage dischargedin the United States is 59 g per person. H...

A: The average daily mass of 02 taken up by sewage discharged in the United States is 59 g per person. ...

Q: What α-halo carbonyl compound is needed to synthesize each amino acid: (a) glycine; (b) isoleucine; ...

A: (a)The alpha-halo carbonyl compound needed to synthesize glycine must have same number of carbon ato...

A: The Boyle’s Law relationship is expressed as follows, P1V1= P2V2 Here, P1 and V1 are initial pressur...