A representation of liquid water is shown below. Which of the three representations that follow best describes the water after it has boiled into steam?

A representation of liquid water is shown below. Which of the three representations that follow best describes the water after it has boiled into steam? 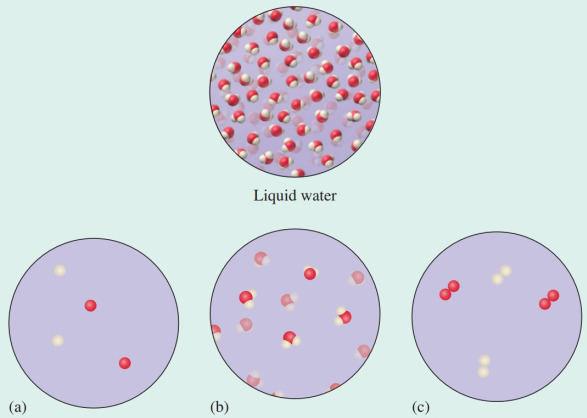 The given representation that best describes water after boiling is to be determined.

The boiling point of a molecule depends upon its intermolecular forces and thermal energy.

Thermal energy is acquired by molecules in motion. Higher the temperature, greater will be the motion of the molecules or atoms.

Boiling a substance can change its thermal energy and intermolecular forces but not the chemical bonds present between its atoms.

Reason for the correct option:

Find more solutions based on key concepts
Show solutions add
. What type of reaction takes place at the cathode in a galvanic cell? At the anode?

Which of the solutions in Exercise 21 shows the least change in pH upon the addition of acid or base? Explain.

Find the north and east components of the displacement from San Francisco to Sacramento shown in Figure 3.59.

FIGURE 8.4 Climograph for a humid continental mildsummer climate station. How do you explain the differences in...

What are the arguments for obtaining antioxidants from foods, supplements, or both?

Which of the following is an example of a processed food? a. carrots b. bread c. nuts d. watermelon

Hydrogen bonds and van der Waals interactions are much weaker than covalent bonds, yet they are vital to organi...

22-70 What kind of changes are necessary to transform a protein having a predominantly (-helical structure into...

What is the role of the cytochromes in the electron transport chain?

10.100 Suppose that you are designing a chemical reactor and you need to know the heat of vaporization for a so...

The approximate quantum number for the angular momentum possessed by the child on a merry-go-round is to be sta...

When a base is added to an aqueous solution of chlorine dioxide gas, the following reaction occurs: 2ClO2(aq)+2...

Ligaments are important components of the skeletal system because they _____.

Why do biologists often use model organisms in their research?

REFLECT AND APPLY Why do you think that most textbooks do not consider a hydrogen bond to be an example of a va...

How might you prepare pentylamine from the following starting materials? (a) Pentanamide (b) Pentanenitrile (c)...

Which of the following processes are spontaneous? a. Salt dissolves in H2O. b. A clear solution becomes a unifo...

You have been appointed to the Campus Dietary Guidelines Committee. What things do you need to consider when de...

You are working for an alternative energy company. Your supervisor has an idea for a new energy source. He want...

What are the two ways in which the escape of high-energy molecules from the surface of a liquid during the proc...

Assign common names to each of the esters in Problem 16-89.

Questions 63-92: Given a formula, write the name; given a name, write the formula. Refer to nothing but the per...

Draw structural formulas for (a) The four primary (1) amines with the molecular formula C4H11N. (b) The three s...

The CO molecule makes a transition from the J = 1 to the J = 2 rotational state when it absorbs a photon of fre...

Review. A light, unstressed spring has length d. Two identical particles, each with charge q, are connected to ...

What is the difference between a planetesimal and a protoplanet?