The following diagram shows a molecular view of the electrochemical cell diagrammed in Figure 14.2. Draw a molecular view showing the changes that occur after the cell has produced electrical current for some extended period of time.

The following diagram shows a molecular view of the electrochemical cell diagrammed in Figure 14.2. Draw a molecular view showing the changes that occur after the cell has produced electrical current for some extended period of time. 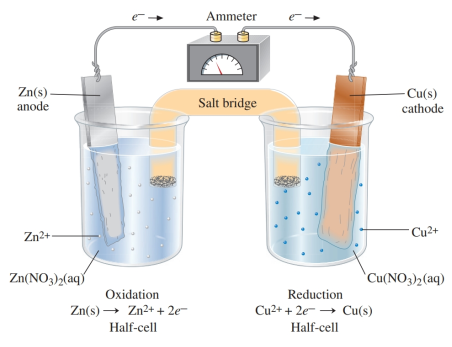 Using the molecular view, the change that occurs after the cell has produced electrical current for some extended period of time is to be drawn.

An electrochemical cell is also known as a galvanic or voltaic cell.

An electrochemical cell is a type of battery that converts chemical energy into electrical energy.

In the left cell, the zinc metal dissolves into the zinc nitrate solution. The zinc metal becomes positively-charged from losing the electrons.

half-cell reaction will occur as oxidation at the anode.

In the right cell, the copper metal dissolves into the copper nitrate solution

Find more solutions based on key concepts
Show solutions add
Give a rationale for the octet rule and the duet rule for H in terms of orbitals. Give the steps for drawing a ...

Gallium metal can be melted by the heat of ones hand. Its melting point is 29.8C. What is this temperature in k...

Which of the following is(are) correct? a.40Ca2+ contains 20 protons and 18 electrons. b. Rutherford created th...

Discuss the functions of various parts of the vascular plant body, including the nutrient- and water-absorbing ...

Consider a grey squirrel falling out of a tree to the ground. (a) If we ignore air resistance in this case (onl...

. A dentist's chair with a person in it weighs 1900 N. The output plunger of a hydraulic system starts Do lift ...

Transcription is similar to DNA replication because both processes ___ . a. use the same enzyme b. copy both st...

What are the arguments for obtaining antioxidants from foods, supplements, or both?

A vegetarian diet planner should be sure to include sources of a. a carbohydrate. b. vitamin C. c. vitamin B12....

Why do these tiny droplets fall at different speeds?

Which of the following is fare) rich source(s) of vitamin E7 raw vegetable oil colorful foods, such as carrots ...

9-46 Why does exposure of a hand to alpha rays not cause serious damage to the person, whereas entry of an alph...

Determine the expected for translational and rotational motions, in RT units, for these gases. a Ne b HCl c C2H...

9.77 When a reaction is exothermic, is the sum of bond energies of products or of reactants greater?

Assign common names to the simple esters produced by a reaction between methanol and the following: a. propioni...

By what factor is sunlight brighter than moonlight? (Hint: See Figure 2.6 and Table 2-1.)

15. Mycologist John Taylor of the University of California, Berkeley, suggests that a close biochemical relatio...

2. How many feet below sea level must an individual descend to exert a total pressure on the body of 3 atmosphe...

Does the cell cycle refer to mitosis as well as meiosis?

REFLECT AND APPLY When deoxyhemoglobin was first isolated in crystalline form, the researcher who did so noted ...

A developing fetus gets oxygen from its mothers blood. Fetal capillaries run through pools of maternal blood in...

Which has the greater bond lengths: NO2 or NO3? Explain.

How could you use 1H NMR, 13C NMR, and IR spectroscopy to help you distinguish between the following structures...

For the chemical reaction Sb2S3+6HCl2SbCl3+3H2S write the conversion factor that would be needed to do each of ...

Roberto was born at 30 weeks gestation and is now 25 months old. His parents and extended familys main concern ...

Indicate whether or not each of the following disaccharides contains (1) two acetal carbon atoms, (2) two hemia...

Both norepinephrine and epinephrine are synthesized from the same protein-derived amino acid. From which amino ...

Few synthetic organic chemicals are dangerous in the very low concentrations in which they enter the ocean. How...