Isotopes are often used as “tracers” to follow an atom through a chemical reaction, and the following is an example. Acetic acid reacts with methanol. Explain how you could use the isotope 18 O to show whether the oxygen atom in the water comes from the —OH of CH 3 CO 2 H or the —OH of CH 3 OH.

Isotopes are often used as “tracers” to follow an atom through a chemical reaction, and the following is an example. Acetic acid reacts with methanol. 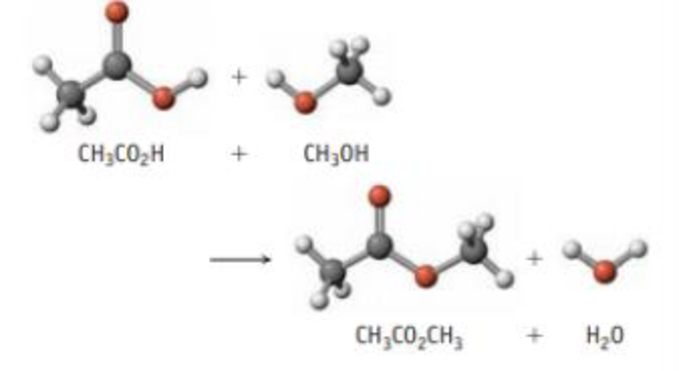 Explain how you could use the isotope 18O to show whether the oxygen atom in the water comes from the —OH of CH3CO2H or the —OH of CH3OH.

Interpretation: Considering the given chemical reaction it should be explained that how isotope is used to prove that oxygen atom in comes from methanol or from acetic acid.

One of the important applications of isotope is that they are used in isotopic labelling that is they are used as tracers in order to analysis the compound and to find out from which reactant molecule it forms.

Find more solutions based on key concepts
Show solutions add
Sketch a graph for the progress of a reaction illustrating the activation, energy for the reaction. Define “act...

During a very cold winter, the temperature may remain below freezing for extended periods. However, fallen snow...

Ultrapure silicon is used to make solid-state devices, such as computer chips. What is the mass of a circular c...

A compound contains only carbon, hydrogen, and oxygen. Combustion of 10.68 mg of the compound yields 16.01 mg C...

In this nation, stringent controls make it difficult to obtain a bogus nutrition credential. T F

Compare the circulation of Cyclone Yasi here with the image of Hurricane Sandy at the beginning of the chapter....

A commuter airplane starts from an airport and takes the route shown in Figure P1.71. The plane first flies to ...

The form of the lens formula used most commonly in physics is Use this to derive an equation that gives s in te...

Two calipers in a national park hike from their cabin to the same spot on a lake, each taking a different path,...

When added sugar is consumed in excess of calorie need, it alters blood lipids in potentially harmful ways. it ...

3.75 The following pictures show a molecular-scale view of a chemical reaction between the compounds AB2 and B2...

15-7 Answer true or false. The cis and trans stereoisomers of 2-butene are achiral. The carbonyl carbon of an a...

The digestive tract of newborn chicks is free of bacteria until, for example, they eat food that has been expos...

Regarding child nutrition programs, which of the following statements is most correct? a. The nutritional analy...

Action potentials occur when ______. a. potassium gates close b. a stimulus pushes membrane potential to thresh...

REFLECT AND APPLY Suggest a reason why the same protein system moves both sodium and potassium ions into and ou...

In addition to a low Po2, the peripheral chemoreceptors are also sensitive to a/an 1. Decreased H+ 2. Increased...

When you think of a “nice night,” what does the sky look like? You have a friend who is an astronomer. What wou...

When a metal ion has a coordination number of 2, 4, or 6, what are the observed geometries and associated bond ...

40. Draw structural formulas for any three isomers of octane.

Name at least six items you recognize to be composed of organic compounds.

Why is the following situation impossible? Figure P28.46 shows an experimental technique for altering the direc...

Indicate whether or not each of the pairs of compounds in Problem 18-41 are epimers.

Use the second law of thermodynamics to explain why we can use oil only once as a fuel, or in other words, why ...

Use the conversion factors listed in the Conventional Units to SI Units table in Appendix A to convert the foll...

In acetic acid, CH3COOH, the OH hydrogen is more acidic than the CH3 hydrogens. Explain.

Why do you suppose an oceanography textbook begins with a discussion of the origin of heavy elements?

The magnification of the image formed by a refracting surface is given by M=n1qn2p where n1, n2, p, and q are d...

You are watching a new bridge being built near your house. You notice during the construction that two concrete...

Calculate the equivalent masses of HNO2 and H2SeO4 in Question 63.