The graph of P ′ and illustrate about the yeast population.

To Sketch: The graph of and illustrate about the yeast population.

Given that, the graph represents the population function for yeast cells in a laboratory culture.

From the graph, it is very clear that the slope of the graph is always positive. This implies that the derivative of the graph must have a positive functional value.

Initially, the value of is very small and its starts increasing rapidly before hours and then the increase becomes negligible just after and becomes constant

after a very long time.

This implies that the graph of initially starts with a very low value and it keep increasing rapidly and then reaches the maximum value between and .

Then, the value of decreases and gets closer to zero.

Use the above information and trace the graph of as shown below in Figure 1. 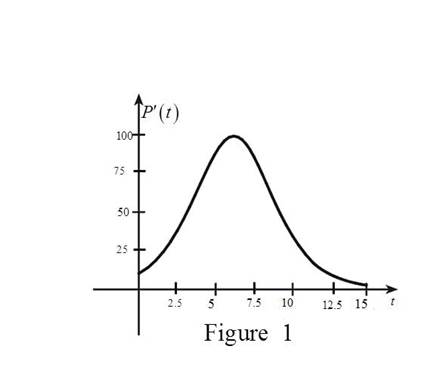 The graph indicates about the rapid growth of yeast in between and and then the growth rate declines afterwards.