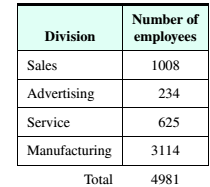 a. Lice the Hamilton method to determine the number of computers to be apportioned to each division.

b. Use the Jefferson method to determine the number of computers to be apportioned o each division. Does this particular apportionment violate the quota rule?

Use the Hamilton method to determine the number of computers to be apportioned to each division.

The Hamilton/Vinton Method sets the divisor as the proportion of the total population per house seat. After each states population is divided by the divisor the whole number of the quotient is kept and the fraction dropped.

Under the Hamilton plan, divide tile enrollments of each division by the standard divisor and round the quotient down to a whole number I

You place a frozen pie in an oven and bake it for an hour. Then you take it out and let it cool before eating i...

Using Parentheses when Differentiating In Exercises 25-30, find the derivative of the function. See Example 6. ...

In the Preview for this Chapter, we discussed a study by McGee and Shevlin (2009) demonstrating that an individ...

Work In Exercises 39 and 40, find the work done by the force field F on a particle moving along the given path....

Draw a picture to show that n=21n1.311x1.3dx What can you conclude about the series?

GER Are senior citizens who live in retirement communities more socially active than those who live in age-inte...

A sample of n = 10 automobiles was selected, and each was subjected to a 5-mph crash test. Denoting a car with ...

In Exercises 9 and 10, classify the triangle not shown by considering the measures of its angles. a All angles ...

Convert the following percents to decimals. 121%

A patient takes 150 mg of a drug at the same time every day. Just before each tablet is taken, 5% of the drug r...

A rectangle has an area of 36 in2. What is the limit smallest possible value of the perimeter of the rectangle?

Testing for Symmetry In Exercises 5-8, test for symmetry with respect to each axis and to the origin. xy=2

Using a p -Series In Exercises 33-38, use Theorem 9.11 to determine the convergence or divergence of the p-seri...

Express each ofthe word problems in Exercises 7 through 19 as equations. Let the unknown number equal x and by ...

Finding a Potential Function In Exercises 51-56, determine whether the vector field is conservative. If it is, ...

Domain The set of all real numbers for which an algebraic expression is defined is called the domain. What is t...

Finding the Center of Mass In Exercises 1324, find the mass and center of mass of the lamina bounded by the gra...

A partial computer output from a regression analysis follows. a. Compute the missing entries in this output. b....

Does a major league baseball teams record during spring training indicate how the team will play during the reg...

Determining Whether a Differential Equation Is Linear In Exercises 3-6, determine whether the differential equa...

A clinical researcher has developed a new test for measuring impulsiveness and would like to determine the vali...

True or False: is a convergent series.

An instructor has graded 19 exam papers submitted by students in a class of 20 students, and the average so far...

In exercises 29-32, you are planning a survey for which the findings are to have the specified level of confide...

An Easy Power Formula Model the following data with a power formula. You should be able to do this exercise qui...

Using the Remainder Theorem In Exercises 45-50, write the function in the form f(x)=(xk)q(x)+r for the given va...