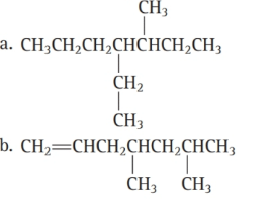 Each of the given compounds is to be named.

Hydrocarbons are the organic compounds which contain only carbon and hydrogen atoms.

Alkanes are the saturated hydrocarbons in which all the carbon atoms are attached through single bonds.

Alkenes are the unsaturated hydrocarbons which contain at least one double bond.

Alkynes are the unsaturated hydrocarbons which contain at least one triple bond.

The IUPAC rules for naming the compound are:

The longest continuous chain is to be selected and then the number of carbon atoms is counted in that chain.

The base chain is to be numbered in such a way that the substituent gets the lowest number.

Hence, the name of the compound is 4-ethyl-3-methylheptane.

Find more solutions based on key concepts
Show solutions add
You have a chemical in a sealed glass container filled with air. The setup is sitting on a balance as shown bel...

In 2006, a Russian team discovered an interesting molecule they called sulflower because of its shape and becau...

Emerald-green crystals of the substance NiSO4-6H2O are used in nickel plating. What is the chemical name of thi...

The velocity of the wind relative to the water is crucial to sailboats. Suppose a sailboat is in an ocean curre...

What negative soil effects can result when irrigated agriculture is practiced in regions that experience great ...

When the brain receives signals that enough food has been eaten, this is called. a. satiation b. ghrelin c. ada...

Alchemists were medieval scholars and philosophers who were the forerunners of modern-day chemists. Many spent ...

By law, food labels must name the ingredients in descending order of predominance by weight and in ordinary lan...

Discuss the features that distinguish seedless vascular plants from algae and bryophytes.

A sample of gold has the same mass as that of the osmium sample in Example 1.1. Which would have the greater vo...

Problem 9-3 Arsenic-74 is a positron emitter used in locating brain tumors. Write an equation for this nuclear ...

6.7 Arrange the following regions of the electromagnetic spectrum in order of increasing frequency: IR, UV, rad...

Why must the protein drug insulin be given by injection rather than taken by mouth?

What fraction of the total number of electrons is in p sublevels for the following atoms? (a) Al (b) Au (c) Ag

The derivation of equation 17.15, in which derivatives are applied to a summation and only a single term remain...

The word nonessential, as in nonessential nutrient, means that the nutrient is not required for growth and heal...

REFLECT AND APPLY If you had a protein X, which is a soluble enzyme found inside the peroxisome, and you wished...

Put these human developmental events in order, from earliest to latest a. blastocyst forms d. implantation b. h...

We are following the progress of human chromosome 1 during meiosis. At the end of prophase I, how many chromoso...

Explain the function of (a) the sinoatrial node and (b) the atrioventricular node.

Propoe a mechanism to account for the reaction of benzene with 2, 2, 5, 5-tetramethyltetrahydrofuran.

A small atomic bomb releases energy equivalent to the detonation of 20,000 tons of TNT; a ton of TNT releases 4...

Exercise during pregnancy is associated with a lower risk of preterm delivery. ______ True______ False

Why do we have environmental problems? Section 1.3 What are the two key concepts for this section? Identify fiv...

A tree grows and increases its mass. Explain why this is not a violation of the law of conservation of matter.

Find the equivalent capacitance between points a and b in the combination of capacitors shown in Figure P25.13....

Classify each of the monosaccharides in Problem 18-82 as a triose, tetrose, pentose, or hexose.

Draw a cross section through an active mid-ocean ridge. Where are the hydrothermal vents located? Where is new ...

Use the figure below to explain how the Ptolemaic model treated some planets differently from the rest. How did...

A beam of protons in a particle accelerator is observed to be moving to the right with a kinetic energy per pro...