(a) Suppose one house from the city will be selected at random. Use the histogram to estimate the probability that the selected house is valued at less than $500,000. Show your work.

(b) Suppose a random sample of 40 houses are selected from the city. Estimate the probability that the mean value of the 40 houses is less than $500,000. Show your work.

To estimate a population mean μ, the sample mean x¯ is often used as an estimator. However, a different estimator is called the sample midrange, given by the formula sample minimum + sample maximum2.

(c) The following table shows the values, in thousands of dollars, of 40 randomly selected houses in the city.

(i) Calculate the sample midrange for the data.

(ii) Explain why the sample midrange might be preferred to the sample mean as an estimator of the population mean.

Based on the results of the simulation, explain why the sample mean might be preferred to the sample midrange as an estimator of the population mean.

"Since you have posted a question with multiple sub-parts, we will solve first three sub-parts for you. To get remaining sub-part solved please repost the complete question and mention the sub-parts to be solved."

The probability that the selected house is valued at less than $500,000 obtained using the given histogram is, 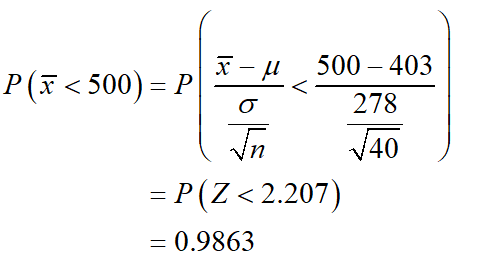 See Solution
*Response times may vary by subject and question.
Tagged in
MathStatistics

A: The mean of the variable X obtained as given below: Here, X denotes the observation.

Q: The lifetime of a cooling fan, in hours, that is used in a computer system has the Weibull distribut...

Q: Carbon Dioxide Listed below are mean amounts of carbon dioxide concentrations (parts per million) in...

A: Step-by-step procedure to construct the scatterplot for linear model using the Excel is as follows: ...

Q: The proportion of eligible voters in the next election who will vote for the incumbent is assumed to...

A: Solution: From the given information, the proportion of eligible voters in the next election who wil...

A: Note: Hey, since there are multiple subparts are posted, we will answer first three subparts for you...