Collision at an Angle

Find v final, the speed of the joined cars after the collision.

Express your answer in terms of v and ϕ.

The mass of each car = m kg

The one car travelling north has speed = 2v m/s

The speed of another car = v m/s

To determine the final velocity, we will apply the momentum conservation along the North direction

We will be squaring and adding both equations to get the result: 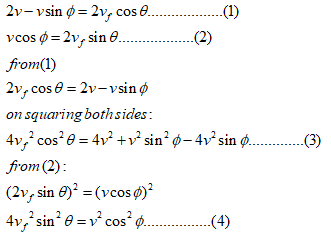 A: Thread: A thread is a simple machine structure mainly used to convert the the linear motion of force...

Q: Specifically a dynamics problem. Question and diagram in pic below.

A: The radial component of velocity of point P can be calculated as follows

Q: What is the width of the vee groove?

A: Given data for SAE 301 stainless steel,

Q: Specifically a dynamics problem. Question in pic below.

A: Given data: The tangential component of the final velocity can be calculated as,

A: The given system of force is –

Q: What are the different polymorphs of zirconia?

A: Polymorphism is the ability of solid material to exist in different cell structures in crystals. The...