NMR or nuclear magnetic resonance spectroscopy is a technique used to determine a compound’s unique structure. It identifies the carbon-hydrogen framework of an organic compound.

Each group of chemically equivalent protons gives rise to a signal.

Chemically Equivalent Protons are protons that are in the same environment, and they must be identical in every way. They experience is the same magnetic force, and therefore, will create overlapping signals on the spectrum.

Therefore, we can determine how many sets of equivalent protons there are in a molecule by looking at the number of signals in its H-NMR spectrum.

The position of the signals depends on the chemical shift.

Chemical Shift is a measure of how far the signal produced from the proton is from the reference compound signal, and it usually measured using the ? or ppm scale.

Chemical shift is affected by Electronegativity :

The electron cloud shields the nucleus from the applied magnetic field, and electronegativity is defined as the tendency of an atom to pull electrons toward itself. Therefore, electronegative atoms remove electron density from the proton. This causes the proton to have less electron density, and this leads to less shielding. If the proton has less shielding, it will feel the applied magnetic field more, and this leads to a higher chemical shift.

Protons that are closer to the electronegative atom are in a less electron dense environment, which means that they’re chemical shifts will be larger.

The structure of these two molecules are : 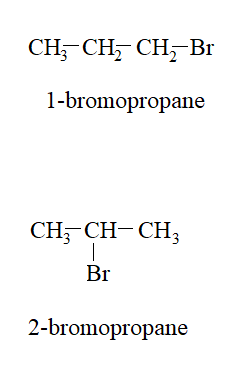 The protons same environment is grouped together as a, b, c in 1-bromopropnae and d, e in 2-bromopropane as : 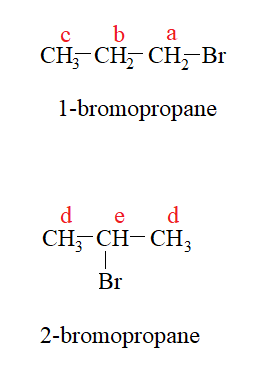 A: A redox reaction can be termed as the kind of chemical reaction in which the oxidation of the atoms ...

A: The equation in which the different forms taken by substances in solution described is known as comp...

A: A chemical equation in which the number of atoms of each element and the total charge of ions are sa...

Q: How can a catalyst be recognized in a mechanism? Select one: The catalyst is used and then regenerat...

A: A catalyst appears beginning of the reaction but does not appear in the overall equation. It speeds ...

A: The Henderson-Hasselbalch equation is given as,