Denomination Effect In the article “The Denomination Effect” by Priya Raghubir and Joydeep Srivastava, Journal of Consumer Research, Vol. 36, researchers reported results from studies conducted to determine whether people have different spending characteristics when they have larger bills, such as a $20 bill, instead of smaller bills, such as twenty $1 bills. In one trial, 89 undergraduate business students from two different colleges were randomly assigned to two different groups. In the “dollar bill” group, 46 subjects were given dollar bills; the “quarter” group consisted of 43 subjects given quarters. All subjects from both groups were given a choice of keeping the money or buying gum or mints. The article includes the claim that “money in a large denomination is less likely to be spent relative to an equivalent amount in smaller denominations.” Test that claim using a 0.05 significance level with the following sample data from the study.

The hypotheses are given below:

There are 12 successes in the sample of size 46 from the first group and 27 successes in a sample size 43 from the second group. The pooled sample proportion can be calculated as follows: 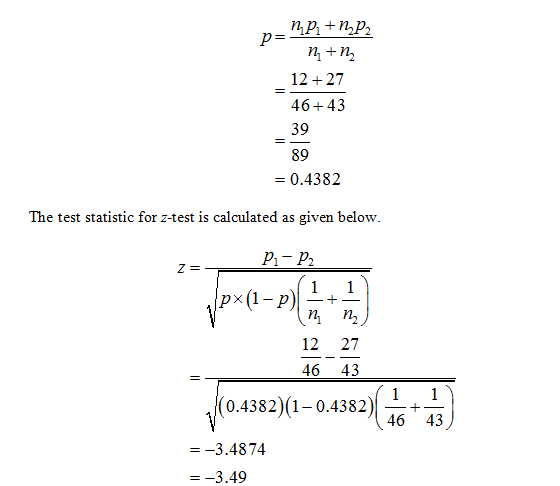 See Solution
*Response times may vary by subject and question.
Tagged in
MathStatistics

Q: Questions 2 A company keeps extensive records on its new salespeople on the premise that sales shoul...

A: Note: Hey, since there are multiple subparts are posted, we will answer first three subparts for you...

A: 1. The data set 3 has an apparent positive, but not perfect, linear relationship between its two var...

Q: In Exercises 5–16, use analysis of variance for the indicated test. Male Pulse Rates and Age Using t...

A: Null hypothesis:          It defines that there is no significant difference between the two populat...

Q: Cell Phones and Handedness A study was conducted to investigate the association between cell phone u...

Q: Transformations of Data Example 1 illustrated the use of two-way ANOVA to analyze the sample data in...

A: Hi! Thank you for posting the question. Since your question has more than three sub-parts, we have s...

Q: Heights of Mothers and Daughters Listed below are heights (in.) of mothers and their first daughters...

Q: A rainstorm in Portland, Oregon, wiped out the electricity in 5% of the households in the city. Supp...

A: Solution: a. Let X be the number of households lost the electricity. From the given information, n=7...

Q: Consider the probability distribution of a random variable x. Is the expected value of the distribut...

A: From the given option, the correct option is No. The expected value can be a value different from th...